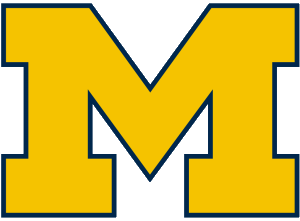 It wouldn’t be recognized until years later, but Michigan was entering the 1902 season on the heels of the programs first ever national championship. It was a season marked by a significant turnaround for the Wolverines. In the 1901 season Michigan finished fifth place in the Western Conference with one loss to their archrival Chicago.

Michigan Quarterback Boss Weeks returned, along with star Running back Willie Heston, to an offense averaging 50 points a game in 1901. They would be the first of what became Fielding Yost’s famous “Point-a-Minute” teams. If anyone wondered whether the 1902 squad could follow suit, those questions were quickly answered.

Despite only returning three starters on the offensive line, Michigan’s offensive fire power would prove once again to be pivotal to the success of the 1902 Wolverines. Boss Weeks, team captain, led the Wolverines to a season opening victory against Albion College with a score of 88 to 0. Michigan put up eight touchdowns in the first half alone. Allowing one first down in the entire game.

Michigan followed up with a big victory against Case Western Reserve University. Despite winning the game in dominant fashion 48 to 6, the biggest story to come out of the game was a 30-yard touchdown run by Case Left Halfback, Davidson. The Detroit Free Press ran the headline, “MICHIGAN’S GOAL LINE CROSSED”. The Michigan Alumnus posted an article noting the touchdown had “caused consternation among coach, team, and students…it had been their fondest hope that the goal line should remain uncrossed another year.”

A Barrage of Touchdowns

Four days after allowing points in a game for the first time since 1900, Michigan played their second ever game against Michigan Agricultural College (MAC), now known as Michigan State University. MAC came into the game having dropped their season opener against Notre Dame 33 to 0 but followed that with an 11 to 0 win against Detroit. The chances of an upset against the Wolverines were slim even with Michigan Running Back Willie Heston and Right End Everett Sweeley out of the game.

Michigan scored 71 points in the first half and added another 48 in the second for a final score of 119 to 0. It was Michigan’s highest scoring win since their beatdown of Buffalo a year prior (128-0). It would be the highest point total of the season.

The Michigan Alumnus called it “the greatest fusillade of touchdowns ever known to the football world…” The Detroit Press noted that “the opinion is quite general that if Heston and Sweeley had been in the game, the Buffalo record would have been beaten, but, as it was, Michigan was simply fagged out running down the field for touchdowns.”

With the second half cut to 18 minutes, the Wolverines had scored 119 points in 38 minutes for an average of 3.1 points per minute of play. Truly the “Point-a-Minute” name given to the team was an understatement.

Following Michigan’s near record setting outing against the Aggies, The Wolverines posted yet another impressive victory, this time against the Indiana Hoosiers. Led by College Football Hall of Famer Zora G. Clevenger, Indiana could do little against an impressive Michigan defense. The Michigan Alumnus said: “Only once was Indiana able to make an impression on her impregnable wall and that on a very short run by Clevenger.”

Michigan would go on to defeat the Hoosiers 60 to 0 behind a stellar performance from James Lawrence who accounted for 29 of Michigan’s points. The game was played in front of 2,000 school children and their teachers. Even the University President James B. Angell attended the game, his first of the year. A more nefarious attendee also sought to witness Michigan’s domination firsthand. Phil King, head coach of the Wisconsin Badgers, used the opportunity to scout out Michigan for any potential weaknesses.

At this point, Michigan was averaging almost two points per minute of play.

Michigan then traveled down to Toledo, Ohio to play a neutral site game against Notre Dame. Betting odds not only had Michigan heavily favored, but also had a 2 to 1 shot that the Irish wouldn’t even score. It was very nearly a disaster for Michigan who led only 5 to 0 at halftime on a slippery and muddy field. Notre Dame captain Louis Salmon, who had a reputation for being the “hardest line bucker in the west” very nearly broke through Michigan’s defense in “the most vicious and determined manner to score”. He carried the ball eight consecutive times and came within five yards of a touchdown, only to turn the ball over on downs.

Michigan’s running game would wear down the Irish front and go on to post three scores in the second half. An altercation also occurred between Michigan end Curtis Redden and a Notre Dame player named Lonnegan resulting in the ejection of Redden.

On October 25th, 1902, the largest crowd ever gathered at Ferry Field in Ann Arbor witnessed the Wolverines deal another demoralizing blow to an opponent. Offensively, the Wolverines “simply ran the Ohio team off their feet” according to the Detroit Free Press. Running Back Willie Heston stole the show with a pair of touchdown runs from 20 and 70 yards out in a performance that was considered a “return to form”.

Michigan’s offense was free to run all over Ohio State thanks in part due to the poor tackling of the Buckeyes. The Free Press noted the Buckeyes “failed to hold a man when they got their arms around him.”

Michigan’s defense was also credited with a strong game as Ohio State “never got near enough to Michigan’s goal line to see what the cross-bars looked like,” according to the Free Press. The Wolverines would go on to win 86 to 0.

Michigan would face it’s toughest opponent of the season in the Wisconsin Badgers. Both team finished the 1901 campaign with unblemished records making this one of the more prestigious events in College Football at the time. It’s estimated that 20,000 fans crowded Marshell Field in Chicago, the most to have ever watched a College Football game in the west. In fact, mid-way through the game, a temporary bleacher holding several hundreds of people collapsed causing many injuries but no deaths.

Michigan scored the game’s only points late in the first half, but the story of the game was the Wolverine defense. Wisconsin only once possessed the ball in Michigan territory failing to take advantage of several offensive miscues by the Wolverines including a fumble inside the Wisconsin 10 yard-line and multiple missed field goals.

The Detroit Free Press still considered it to be the greatest game of football ever played on a western gridiron. The victory removed almost all doubt Michigan would go on to win the Western Championship though still four games remained.

Michigan’s offense returned to form the following week, posting yet another 100+ points in a blow-out win against Iowa. Michigan’s 107 points were the most ever scored against a Big Ten Conference opponent. It was said Michigan’s various tactics of “…delayed passes, fake kicks, double passes and end runs…” were enough to leave the Hawkeyes “wholly bewildered”. Further, Yost was absent for the game, choosing instead to watch Minnesota play in preparation for their upcoming game.

Michigan then returned to Chicago to take on fellow legendary coach Amos Alonzo Stagg and his Chicago Maroons. Michigan would win a relatively uneventful game 21 to 0. Despite back-to-back losses against the Wolverines, Stagg was lauded for his stout defense that only gave up 21 points to Michigan.

Next, it was Michigan versus Oberlin in a game that would cement the 1902 Michigan Wolverines as one of the best ever, if not the best ever football team at any level. With Minnesota coaches and players attending the game, Michigan kept its playbook relatively closed so as not to tip off the Gophers. With a 63 to 0 rout, Michigan had played 540 minutes and scored 621 points. The Detroit Free Press said, “…even if Michigan is shut out by Minnesota in seventy minutes of play the Wolverines will have obtained an average that is the greatest feat in gridiron history.”

In an iconic season finale, the Michigan Wolverines played the Minnesota Golden Gophers on Thanksgiving Day 1902. Michigan once again imposed their will in the trenches even if the score didn’t quite match what they were used to. The Detroit Free Press noted, “the Minnesota line was hurled back again and again…” which led to 12 to 0 lead at the half. During halftime, South Bend, Indiana resident Louis Elbel conducted the Michigan band, playing a song he had composed four years earlier entitled “The Champions of the West” now known today as “The Victors”.

Minnesota would score the second touchdown ever recorded against a Yost coached Michigan team. Boss Weeks muffed a punt allowing a Gopher to recover and advance for a touchdown. Michigan would still win the game, 23 to 6.

Michigan would complete its second straight undefeated season under Fielding Yost. The team would become the second of five “point-a-minute” squads. By seasons end, Michigan had outscored their opponents 644 to 12 giving them an average of 1.05 points per minute of play.

All-American honors were given to Joseph Maddock, Willie Heston, and captain Boss Weeks. Weeks himself described the 1902 season as such: “The story of the football season of 1902 is easily told. Champions of the West, with no one to dispute it.”